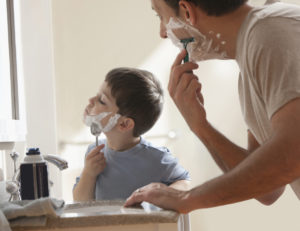 I hope that young children were not still up and watching the *Academy Awards broadcast when Will Smith got out of his seat, walked up the concourse, and forcefully slapped Chris Rock for making a poor joke at the expense of his wife Jada Pinkett Smith.  But even if children didn’t watch it live, they are likely still being exposed to the ongoing coverage and analysis of this startling event on social media and mainstream media.  Disagreement abounds over which man was most in the wrong.  Some posters and oped writers try to justify each man’s actions.  There have been thoughtful critiques about toxic masculinity in our culture, and how it inevitably leads to violence of one kind or another. Many believe Chris Rock was bullying Jada Pinkett Smith by publicly mocking her bald head, especially given her alopecia.  Some respond that comedians insulting celebrities at “star-studded events” and roasts has become something of the norm and is to be expected.  Some say Will Smith’s retaliation was also bullying behavior, since Smith was trained to box like a professional for the film Ali and is much bigger and stronger than Rock.  But others respond that his response was justified to “protect” his wife. (I confess, I thought Pinkett Smith’s grimace of disgust and exaggerated eye roll at the weak joke was a pretty potent response in and of itself). What does this whole event model for our children, who emulate adult behavior?  Is mocking others, especially for things they can’t control, ever justified?  Does saying “Just kidding!” after a cruel remark make it okay?  Should bystanders go along by joining the mocking laughter, or do they have a responsibility to call out bullying behavior? Is lashing out aggressively after a perceived put-down ever justified?  Does being “in the heat of the moment and not thinking clearly” make an impulsive violent response, okay?  Should bystanders go along by saying nothing, or do they have a responsibility to call out violent behavior? What does this event say about how women and girls should expect to be treated?  In the Me Too era, a time when native women have disappeared in shocking numbers, when human trafficking and domestic violence are still huge social problems, we know that women do need the strong protection of laws and social norms.  Is this kind of protection the same or different than what happened at the Oscars? If you haven’t already, I encourage you to watch the documentary “When We Were Bullies.”  This film was also featured briefly at the Academy Awards as a nominee for best short documentary.  Ellen Bruno, the creator of the masterful film Split about the children of divorce was a creative consultant for this film, which is extremely well done.  It focuses on a 5th grade bullying incident and the lingering effects, 50 years later, on those who participated.  Like this essay, it raises important questions and examines context and perspective, but does not aim for simplistic resolutions. As parents and adults who care about children, we need to have open conversations with them, and ask curious questions about bullying behavior vs. respectful behavior and the difference between control and power.  We need to ask ourselves what it really means to create safety for others, and what responsibility we all share when safety is violated.  And we need to always be aware that the most powerful tool in the adult toolkit is modeling the behavior we want our children to emulate and taking responsibility rather than blaming others for any time we (as humans) fall off the high road. *Since this article was written, Will Smith has apologized publicly for his inexcusable behavior at the Academy Awards ceremony.  He has been banned from the Academy of Motion Picture Arts and Sciences and the Awards ceremony for 10 years.