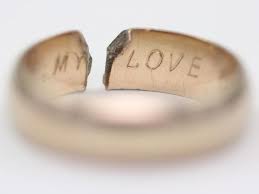 In this upcoming series of posts I will outline what I think were the most important decisions I had to make when in 2008 I began the journey to end my thirty-year marriage.  It is my hope that readers of these posts will be able to reflect on their own circumstances and either find guidance, reassurance, or be prompted to reflect further on their own situation and realize they are not alone in this journey. In this first post, I will write about what to me was not only the most important decision but also the most difficult.  Decision point number one was to come to the realization that my thirty year marriage needed to come to an end and that I was the one to make it happen.  It took me an incredibly long time to reach this point.  I now realize that maybe our divorce or “getting unmarried,” as I will refer to it from here on, should have happened twenty years earlier.  As I reflect back over the years, I believe the process of my becoming unmarried did begin twenty years earlier and not in 2008 when I took the initial steps to end the marriage.  I suspect many, although not all, marriages begin to end much earlier than the time when one spouse takes that first step forward. You see, I had actually started thinking of getting unmarried twenty years earlier.  At one point I went so far as to talk with a family law attorney, engaged that attorney, and later decided not to proceed.  Four years prior to my legally beginning the end of my marriage, I began going to counseling on my own.  I pleaded with my spouse to come with me but to no avail.  I continued asking, but after her repeated unwillingness I stopped asking and continued on my own.  I had spent two years talking off and on with the pastor of my church about our marriage difficulties and that I was seriously thinking of ending the marriage.  I felt like there was nothing more I could do. I am sharing all this with you because for me, and I am sure for many others, I had to know that to move forward with “getting unmarried” I needed to answer the question, did I do all that I could, with an unequivocal yes.  I’m sure if you asked my former spouse today, she would say I could have done more.  In my mind I really felt as though I did all that I could do and that is what mattered to me.  Holding this feeling was and is comforting to me as I continue to move forward in this journey called life.  How would you answer, have I done all that I could? If you are considering  “getting unmarried” or maybe you have already made that decision I invite you to travel along with me on this journey, as this transition in life continues.  Watch for the next post of “Getting Unmarried” Part 2; How to get unmarried.  In Part II I will talk about decision point number two, deciding for yourself how you want to get unmarried.  How are you going to do it? Read Getting Unmarried Part II: How To Get Divorced here.